My lamentations have shaken loose locusts.

They whir in the burned-out nave of my body.

In the shower, whole decades wash from my body.

A girl’s hairless limbs emerge naked from the spray.

A small city disappears in

the near-sighted dusk of a coastal winter.

Someone is walking home as I once did.

Someone is thinking as I did once

this is their neighborhood, their consolation.

Once I thought words could describe … 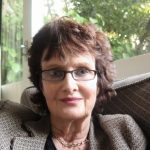 In memory of Callie Barr, known in historical record

as caretaker of William Faulkner’s family

You may find her behind

of fortress where then now

you find no real entry place.

I am no longer blind, but there was a time many years ago when I lost my vision. Next week I’ll see the eye doctor for my cataracts, and he’ll ask if my eyes were ever damaged. I don’t know …

My Father, the Atomic Bomb

I would not be who I am today were it not for the Bomb.

Had there not been a bomb, my biological father—a Manhattan Project physicist—would not have died in 1951 from radiation-induced cancer a month before my fourth birthday, …

The Longing of Men (fiction)

In the water, the rocks were a dozen colors, ochre to a bruised orange, purple to brick, dusky green to leaden blue, moss-tinged yellows—and all these eclipsed with flashes of sky ricocheting off the surface. These boulders and stones were …

I began to see, however dimly, that one of my ambitions, perhaps my governing ambition, was to belong fully to this place, to belong as the thrushes and the herons and the muskrats belonged, to be altogether at home here. …

The Quiet Boy Noé Who Waited to Speak

He could not help himself.

Every sound he heard he remembered,

Making a great library of music inside himself.

He didn’t mean to, but could not help himself.

A sound asks for attention, …

The dad had a sweet tooth; it was something fierce. When it got ahold of him, no matter where he was—clearing invasives on the job, taking the kids for a weekend, eating his one-pan dinner—he had to satisfy it, like …