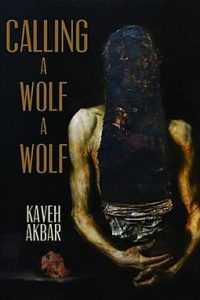 on Calling a Wolf a Wolf by Kaveh Akbar

By David Nilsen
From the Winter 2017 Issue

Kaveh Akbar’s debut poetry collection, Calling a Wolf a Wolf, is about the essential consequences of incarnation, is a sensory catalog of wounds and wonders, vices and pleasures. His poems—fragmented, plaintive, at points frantic—are occupied with what it means to be a spirit and a mind haunted by their physical baggage and delighted by their physical inheritance—or, as Akbar puts it in “No Is a Complete Sentence,” “the body happens and we consequence up.”

Calling a Wolf a Wolf is tied together by the series of poems that formed Akbar’s debut chapbook, Portrait of the Alcoholic (Sibling Rivalry Press, 2017). Akbar was an addict for several years in his young adulthood, and has been sober now since 2013. His past of addiction, the oblivion with which he numbed himself, and the damage and lessons that came his way form the skeleton under the flesh of Akbar’s robust and varied muses. Whatever else he writes about—God, his father, love, sex, loneliness, joy—his old familiar seems to lurk in the shadows, watching him. Akbar never denies that constant hum, and in naming it—and even calling to it—he keeps it at bay.

Despite the weight of these addiction poems, Akbar weaves beauty into a period in his life he largely regrets. In “Portrait of the Alcoholic Three Weeks Sober,” writing about the siren call of chemical alleviation and his intense desire for another drink after swearing off the stuff, he says, “Imagine being the sand forced to watch silt dance // in the Nile.”

Though honest about his descent into addiction, Akbar is also gentle with himself, allowing a mercy that can only come after confession. In “Milk” he tells us, “I need to be taken care of,” and often enough he is both patient and nurse, child and mother, the shoulders rocking and the arms around them. He sees his own sickness, but he refuses to limit himself to that diagnosis. In “Prayer,” he tells of a young woman who ate nothing but hair, and when she died and her stomach was opened, the mass of tangled strands formed the perfect outline of that organ. Thinking of her, he laments “reducing / a life to its most grotesque artifact,” boiling a complex human experience down to one freakish footnote. He’s an alcoholic; he’s also a lover, a son, someone who cries at concerts—and someone who has spent a life assigning words to objects and experiences, then handing them out like bouquets to whoever will read them.

This act of naming forms the book’s emotional theme, its gaze forward. Addiction is the soil the poetry grows from; creation via description is the thing that grows. As Adam named the beasts of the garden before his fall, Akbar does the same after his, with eyes informed by both the injuries and the preciousness of life.

In “Desunt Nonnulla” he tells how as a child he “walked learning / the names of things each new title a tiny seizure / of joy,” then asserts as an adult that, “if you teach me something / beautiful   I will name it quickly before it floats away.” He cuts to the chase in “What Use Is Knowing Anything If No One Is Around,” expressing the artist’s statement of his vocation directly: “The spirit lives in between // the spaces of a name.”

At the height of Akbar’s addiction, however, this process betrayed him. The wolf of the book’s title is his addiction itself, and he expresses in the title poem that he believed calling his alcoholism what it was would give him power over it:

thinking if it had a name it

The naming did not prove adequate; the power worked on a different frequency. Being brave enough to call his problem what it was didn’t circumvent impulse and eliminate self-deception as he ’d hoped it would.

When Akbar realized recovery would require more than mere words and began the lifelong struggle of sobriety, he found his process of naming turning in an unexpected new direction: gratitude. Used to assigning descriptors to pain and loss, he was unprepared to find himself suddenly using synonyms for joy. In “I Won’t Lie this Plague of Gratitude,” he writes

I always wanted to be a saint

but I thought I ’d be one of the miserable

ones      sainted by pain burnt alive inside

a brazen bull      instead I weep openly at obnoxious

from blocks away and I lose it completely

there is a word for these fits of incomprehensible

when my mouth was full of cake

The central pivot of Calling a Wolf a Wolf is in the conflict between the piss and filth and loss that come from being a part of physical creation and the poet’s higher role of naming, which requires recognition and is a form of creation itself. The dread and delight that permeate this tension yield an irreducible complexity of language, a tangled knot of expression that leaves Akbar’s poems scattered and fragmented, but always precise in their expressed feeling. He succinctly exposes this body/mind duality in “Every Drunk Wants to Die Sober It’s How We Beat the Game” when he says, “I have always been a tangle of tongue and pretty / want,” language and lust vying for control of his impulses. The deeply human ache and wail of these poems originates in this conflict—the perpetual, unhealed scar at the grafted joint between our human and animal natures. “Every day // my body follows me around asking / for things” he tells us in “Stop Me If You’ve Heard This One Before.” The body here is presented more as a constant familiar, a shadow, than as the substance of our personhood.

This duality is further explored in a peppering of verses throughout Calling a Wolf a Wolf that deal with Akbar’s God and Akbar’s father, and the way these two entities blur and inform one another in the poet’s imagination and memory. In “Learning to Pray,” Akbar describes how as a boy, before he knew much of anything about the world, he found his father beautiful:

I knew only that I wanted

that twilit stripe of father

mesmerizing as the bluewhite Iznik tile

hanging in our kitchen, worshipped

as the long faultless tongue of God.

His faith in both became muddled in adulthood, however. “Droughts occur // constantly under God’s holy watch,” he tells us in “The New World.” And near the end of the collection, in “Fugu,” he confesses,

believe my father’s umbrella caused the

has turned out to be as powerful as

I believed my father to be

There are moments of tremendous beauty and pathos in Calling a Wolf a Wolf, even outside its central themes. As discussed, Akbar moves from desolation to gratitude, and that gut recognition of beauty bleeds through even the gravest of passages. In “Thirstiness Is Not Equal Division,” he melds the wonder and melancholy of existence into a nearly perfect image:

of evolution as ancestral advice     then a baby’s eyelids

drooping from fruitsugar could mean this world

is too sweet to bear awake

Akbar never loses his melancholy, despite his wonder. In simple, poignant lines he concludes “Personal Inventory: Fearless (Temporis Fila)” with this confession and plea:

This may be me at my best.

Laid out before us as he is in this collection, Akbar accepts our verdict. Whether this is his best or not, Calling a Wolf a Wolf is a remarkable debut.

David Nilsen, a writer and former librarian living in Ohio. He is a National Book Critics Circle member, and his writing has appeared in The Rumpus, The Millions, Rain Taxi, Open Letters Monthly, the National Book Critics Circle Critical Mass blog, and many other publications. Outside the literary world, he is a professional beer writer and educator and Certified Cicerone. He lives with his wife, daughter, and a very irritable cat.