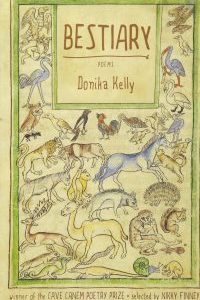 on Bestiary by Donika Kelly

By Claire Schwartz
From the Winter 2017 Issue

To say anything about Donika Kelly’s gorgeous debut poetry collection Bestiary is difficult. The book takes its title from illustrated volumes made popular in the Middle Ages that categorize real and imaginary animals. In classical bestiaries—which often fasten each animal to a moral lesson—naming is a process of differentiation, a border-drawing. Yet, every time I go to name something about Kelly’s Bestiary, to draw a boundary around the meanings of things, what has not been accounted for rushes forward—each attempt at fixing sense becoming a trap door.

I think of all that recurs in this collection: hardness, softness, the father and his sexual abuse, the mother and her memory loss, the beloved, swallows, bears. The swallow is the possibilities of flight, the voice withheld; the bear, that animal which winters and fiercely protects its young. Bear also means to hold—and the poems in Bestiary attend to how holding and being held changes us. In Kelly’s language, one meaning does not displace another. I can’t bear it, I write, and feel the lumbering animal enter my sentence. And who is the “I” here? How does the subject’s shape shift under its load? How does the load settle into the subject’s shape? Kelly reminds us that naming is at once a way to insist on the specificities of self and a way to call another close. Fittingly, nothing quite fits.

“Refuse the old means of measurement,” begins the collection’s first poem, “Out West,” summoning geographic expanse and mythic exploration while cautioning that possession, colonization, erasure—those dominant modes of engagement that constitute the founding of the United States and its imperial projects—will not serve. So, by the time the first-person plural enters, in the poem’s last couplet—“We are all apportioned/a certain measure of stillness”—clearly this is stillness known anew, a we of a different measure.

“There is a we, / . . . more fracture / than sense,” the speaker in “Ostrich” affirms. The poet Robin Coste Lewis reflects on the vital pervasiveness of fracture: “Life, for me, is, at its core about absence, fragmentation, ruin, and return.” She also says, “The desire to have a whole story in one teaspoon is . . . as colonial as anything else.” Bestiary relinquishes the colonial attachment to the myth of definitive borders and a singular narrative. Here, there is no sole patriarchal source. Instead, the generic conventions of the western movie, the cityscape of Los Angeles during the uprising in the wake of four LAPD officers beating Rodney King, the beasts of Greek mythology, the mating rituals of the bowerbird, the tender guardianship of dogs, nineteenth-century poetry, and the erotic connections of gay porn are all absorbed by the poet and remixed as resource. Nikky Finney, who selected this book for the Cave Canem Poetry Prize, writes that “Bestiary is the first book of poems by an all Black girl who teaches us that nothing is all black, or all female, or all male, or all belonging to humans, or all tidy.” The we in Bestiary is not a cohesive entity—not the binding of any singular us that would mark an excluded uncomplicated them—but a shifting and multiply-meaning body, as porous and changing as any body.

In Bestiary, the word I is infrequent, but the self is expansive:

Soon you will be a person. Nothing

will change. Your body will be of a piece

with all other bodies: the thrush,

the dormouse, the great black bear.

In the line ending “of a piece,” the break constitutes a threshold that is, like all borders, a dis/joining. The break stages a disjuncture between “your body” and its surroundings, even as the stanza’s content insists on continuity. The I’s constitution is exposed as contingent.

At times, the we shelters the I, as in “Hermit Thrush”:

finally, the white girls, after a long

summer of bronze and muscle and shine,

cover their legs. Winter, where we can finally feel

Here, the we acts as a buffer between the black self and white violence—a shield in hostile geography. Only after narrating the environment’s alienating qualities and the seasonal self-conception as beautiful under the banner of we does the I emerge; a vulnerable assertion.

In “How to be alone,” the kaleidoscopic sixteen-page poem at the book’s center, the I similarly takes cover in the we: “Practice the lonely drag that makes you / no different from the men you resemble. / Let this be a kind of safety.” Even as the collective offers a measure of protection, the specificities of self dissolve in the I’s affiliation with the group.

and failure: to be knowable,

The stanza break extends the possibility of a unified we—“we . . . figure one”—until landing on the first line of the following stanza (“we . . . figure one // another”) fractures the pretense of uncomplicated unity. The homonymic hinge that follows—know/no—collapses the strivings of desire (“to be knowable, / to be known”) with refusal (“no”). To belong to we, I is always dressed in partial recognition. This produces a kind of loneliness.

Claudia Rankine writes in Don’t Let Me Be Lonely, “Paul Celan said that the poem was no different from a handshake. . . . The handshake is our decided ritual of both asserting (I am here) and handing over (here) a self to another. Hence the poem is that—Here. I am here.” The I of the poem is an offering to a we forged in “desire and failure.” We is at once fact and aspiration, a state of being and a state of longing. I am lonely because I want not to be; I am lonely because I want. Recognition, even with its failures, is a constitutive component of belonging; desire is the motor that keeps us trying anyway.

The poems in Bestiary map what we make of each other and ourselves for recognition. In “Love Poem: centaur,” the speaker’s self-aggrandizement gives way to gentle reaching: “what I make, stands / undone. Here is my hand, soft, uncalloused.” In “Love Poem: Mermaid,” the seeking voice defines the speaker’s constitution: “Love, I am made / for calling.” In “Love Poem: Centaur,” what the speaker makes of the beloved, of the self, and for the beloved exist in dynamic interplay: “I would make a burnishing / of you . . . my hands / making an arrow of themselves, rooting / the loosened dirt. I would make for you / the barest of sounds.” In “Love Poem: Chimera,” what we make offers no map of relation; it simply registers the cacophony: “What menagerie / are we. What we’ve made of ourselves.”

In Bestiary, the question of what to make of oneself finds formal expression in the collection’s several self-portraits—“Self-Portrait as a Block of Ice,” “Self-Portrait as a Door,” “Self-Portrait as a Wooden Flower”—with each offering as much inquiry as statement: where might “I” be? How might “I” be/come? Throughout the self-portraits, an indeterminate imperative recurs: “Remember,” “admit,” “be,” the speakers demand of someone—perhaps, of themselves. These imperatives trace the self talking to the self, shaping the self through language. They also constitute a vector of aspiration that contours/admonishes/reminds the self. In the mirror the you is I, but the mirror is not the self. The mirror is sheet of glass, block of ice, sun-drenched ocean, beloved, language—all those surfaces on which the self figures the self and, in so doing, joins with these sites and is changed.

Of all the surfaces on which the self seeks (to be known by) another, it is language that seems to preoccupy Bestiary most. But the book also reminds us that, like other appeals for recognition, language is twinned with failure. In “Arkansas Love Song,” metaphor does not deliver on its promise to carry us across: “This // is a failure. This disarticulated / wing stands for a disarticulated / wing.” Yet, a few pages later, in “Love Poem: Centaur,” the speaker deploys that very image to insist on the possibilities of speech: “I would make for you / the barest of sounds, wing against wing, / there at the point of articulation.” All language is a kind of metaphor: what it holds for one, it cannot hold for another—and yet it is transformed in the reaching.

If any we comprises selves never wholly knowable to each other, then to claim others as descriptive resource is to erase a part of them. Ludwig Wittgenstein’s Russian teacher Fania Pascal, reflecting on her state after having her tonsils removed, wrote that “Wittgenstein called. I croaked: ‘I feel just like a dog that has been run over.’ He was disgusted: ‘You don’t know what a dog that has been run over feels like.’ ” Still, we keep seeking the experience of others through language. For the speaker in “Little Box,” non-human animals offer the possibility of something other than loneliness: “You ’d rather be a simpler animal. // You try to imagine what the bear feels/The seal. The otter. Always a little group of three. / You worry they are not, in fact simpler, but you are sure they are never lonely.” In “Love Poem: Donika”: “love, I am lonely as a bear.” The clear ascriptions of the classical bestiary fail as the gesture of empathy collapses into projection and the bear is absorbed by the speaker.

If the failure to be wholly known may yield loneliness, that, these poems makes clear, is distinct from alone-ness. The first line of “How to be alone”: “Not that you ever are.”

The we of Bestiary is also the we of trauma, the haunting that populates the I. Throughout the book, trauma means that what has come comes back in disguise. When a boundary is breached, different meanings are activated: a wall is now a door, an “I” is now a “we,” a body is now differently possessed. The father has committed sexual abuse: “In the dream, my father hides inside / another man’s body,” the speaker in “Handsome is” says. Here, trespass is a change of form.

The book is not a bridge that purports to take us unchanged from one place to another, but a connective tumult of accrual. Like so much else in Bestiary, hands, doors, locks, and rooms recur—tumbling and shifting in meaning, inviting a reading across poems. The lock keeps out the threat of the father. “The gusset of your panties / soaked with your father’s semen /. . . / Why the door is always locked.” Then, there is what we lock in so as not to hurt each other—and what, by containing hurt, we do to ourselves: “The woman you love is afraid she is hurting you. / This is the source of her fear. You are afraid / to say, I am hurting.” Elsewhere, the lock is a tender offering: “Here, a lock of my mane.” As we move through the text, language accumulates histories. A word is a room; it contains. A word is a door; it opens.

Trauma is not the only way we are inhabited, altered: not just violence, but also love, opens and closes us differently. Throughout Bestiary, love poems reappear—many of them in the voice of recombinant beasts: satyr, centaur, mermaid. The self is made of many forms. Love poems, Bestiary reminds us, are also mirrors, also self-portraits: language is a way to shape the self outside the self, to make an offering. This is how I bring myself, wanting, to you.

Bestiary begins “Out West.” It ends “Back East,” with a homecoming of sorts:

By the book’s end, Donika Kelly has shaped language to hold this celestial immensity and intimate tenderness. “Refuse the old means of measurement,” we were told at the book’s outset. Now, the measure of sky: a full hand. We have ventured out, and we have come back—to our familiars, homes, loves—changed and primed to hold ourselves and each other anew.