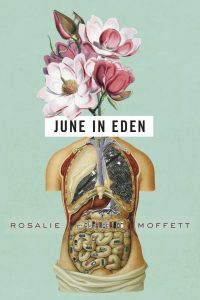 on June in Eden by Rosalie Moffett

By Catherine A. Rogers
From the Winter 2017 Issue

Poets have been lamenting the recalcitrance of language at least since Byron’s Childe Harold complained in the early nineteenth century that he had not found “words which are things.” Approaching the midpoint of the twentieth, T. S. Eliot observed in “Burnt Norton” how

Crack and sometimes break, under the burden,

Under the tension, slip, slide, perish,

Decay with imprecision, will not stay in place,

Will not stay still.

Indeed, one might say that the poet’s whole craft consists of the struggle to fit imprecise language precisely to experience—and, as Eliot discovered, the effort may eventually end in silence. But what happens to poetry when language itself disappears? When words can’t be found to correspond to things because words themselves no longer exist?

For Rosalie Moffett, this is no abstract dilemma. The unifying thread in her first collection, June in Eden, is the poet’s mother’s growing dementia—the result of a head injury—and her ever-diminishing command of language. The title poem places the mother in a garden where, she admits, “I have this thing . . . with memory.” Thing is the word she reaches for when she cannot find one more precise, but for the poet it suggests possibilities and could be anything: “The thing rings or is left / on high.” Common sense can fill in the blanks, but the space marked by thing is more evocative. The garden, like the biblical Eden, is a protected, creative space where

Everything outside the garden

can do as it pleases with computers, etc.

Here, there are things coming into being

In these lines, erased memory makes way for something new by suggesting redemption, a return to Eden. But this is not a blithely optimistic poem. The final image of strawberry runners “covering up the garden pathways” suggests an ominous future of lost connections. June is high summer and a season of growth, but it is also the month of solstice, the longest day and shortest night, after which the year turns imperceptibly but inevitably toward darkness.

The collection turns on this axis, beginning with a poem called “Revisions” which, by way of prologue, confronts the reader with the need to look again because “this / is how the world works / itself out from under you”; the enjambment re-enacts the shock of catastrophic change, requiring re-vision and readjustment upon finding “[t]he inside // out, the language all shifted.” In “What It Was,” the poet finds courage to begin the monumental task of remaking her world within the mother’s own hardboiled wisdom. Regarding the summer crop of tomatoes, which benefits from drying out between watering, her mother unscrews the soaker-hose, saying: “Hardship is good / for the vines. . . . They’re too happy / to set fruit.” Unbelieving, the speaker coddles the vines until they grow “like a forest to the ceiling,” yielding “only a few / tomatoes you had to fight to find.”

After the title piece, the poems enter into a series of linguistic tangles where traditional avenues to meaning are relentlessly baffled: in “Question,” the mother’s mysterious dementia defies diagnosis, leading her to “the end of the hallway / where there was a mirror // instead of more hallway—”. The final dash recalls Emily Dickinson’s ambiguities: consider the “failed” windows in “I heard a Fly Buzz—” that yield no insight into what is beyond. The poems do not seem to reflect a search for insight, exactly; rather, they enact a series of endless perplexities as the imagination pushes to its limits. Indeed, one could say obstacles to insight are a central theme of the book: the Edenic task of seeing and naming the world becomes increasingly difficult as language proves ambiguous, even treacherous, while the mother’s dementia threatens that it will eventually disappear altogether.

Against this threat, the poet grapples with a language that has a life of its own, that seems to refuse to serve all human ends yet is all we have to mediate our experience—a renegade technology that comes to invade our human selves, much like other technologies that appear in the poems: our bodies transformed into our own inventions. Thus, the poet claims to “feel each thing / the way a fax machine would: brilliant // as it passes through.” We learn from bathroom graffiti that “Women // were the first 3D printers.” Cell towers disguised as trees perform treelike functions as they “collect our discarded breath, / transmit it new into air,” while the human lung “passes air down // tiny fingered trees to the place where oxygen is / fed into the smallest of ATMs.” Whether our language, like our inventions, extends our reach into the world or alienates us from ourselves is unclear. Connections are made and then broken, and throughout the text runs the dread of permanent erasure signified by the loss of the mother tongue.

Nevertheless, the poet perseveres. If the Modernist project was, in Robert Frost’s words, finding “what to make of a diminished thing,” the postmodernist Rosalie Moffett wonders what to make of a world of many diminished things that seem to fly apart in all directions. The poet asks, plaintively, “Isn’t there at least one distance / that’s closing?” Later, she affirms, “It’s true, // you will be forever / collecting things // to say, to hold / you down”; in that final line break, we discover that the things we hold are actually holding us.

This reversal is characteristic of many poems in June in Eden, creating a difficult and unstable world view that may try the patience of more traditional readers. Still, Moffett’s work is technically masterful and intellectually challenging—and if it takes us to the brink of a world continually unmaking itself, there is a certain exhilaration in skating along that perilous edge.

Catherine Rogers teaches English at Savannah State University. Her work has appeared in Kalliope: A Journal of Women’s Art, Paideuma, and Women’s Studies: An Interdisciplinary Journal, as well as in the online journals Autumn Sky Poetry and Touch: The Journal of Healing. She cherishes happy memories of having been the very first graduate editorial assistant of The Georgia Review.